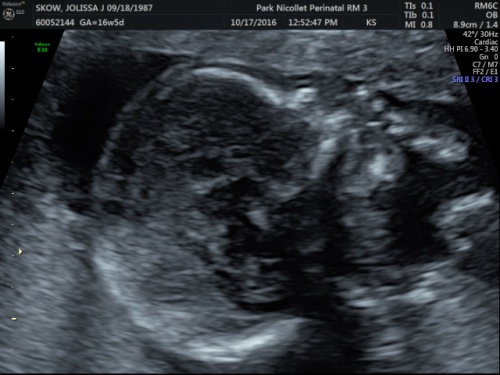 In July of 2016, my husband Colin and I found out our lives were about to change, big time. We were pregnant! We tried only one time, and bam! Pregnant. Of course, we were both terrified to become first-time parents, but we were as ready as we’d ever be.

Before going on with the story, there’s something you need to know; I have lupus. Well, what’s probably lupus, or a combination of lupus and Sjogren’s Syndrome. Because of this, I carry antibodies in my blood that attack healthy tissues in my body. Even though my disease is (and was at the time) well controlled, I still have elevated levels of those antibodies. In pregnant women with said antibodies, there’s about a 1% chance that they’ll cross the placenta and cause what’s called “heart block” in the fetus. We would have to go in for weekly ultrasounds go make sure he was doing ok, starting at week 16. I wasn’t worried at all – in fact, I was looking forward to getting to see him every week!

Everything was going so well – I felt pretty sick to my stomach a lot, but was too excited to let it get me down too much. I was already so in love with that tiny life growing inside of me, and was beginning to register for adorable gifts and plan out his nursery.

When I went in at 18 weeks, though, everything changed…our little man had heart block.

Heart block is a condition where antibodies in a mother’s blood cross the placenta and cause the electrical impulse in the baby’s heart to be blocked from correctly going from the atria to the ventricles. Instead of the “lub-dub” heartbeat, our baby had the lub, but the dub was delayed by about half. His ventricular heart rate was in the 70s.

We were devastated, but not without hope. Although 18 weeks is a perilously early week to diagnose heart block, the baby can live that way until birth, when a pacemaker can be implanted to fix the heartbeat. There’s nothing that can be done in utero, though, so our only choice was to “wait and see” what would happen to our little man.

He did pretty well for a couple weeks, but his ventricular heart rate began dropping lower, causing his heart to have problems getting enough blood to his organs and developing body. By week 25, he had hydrops – fluid was collecting everywhere in his body. Still, he kicked away, and we couldn’t help but hold on to hope.

When he was still alive at week 30, my team of doctors decided to try admitting me to the hospital and giving me a couple drugs that could possibly increase his heart rate slightly to keep him alive inside me until he could be big enough to be born via c-section and receive a pacemaker.

After just 2 days of trying the drugs to save him, I had an unltrasound and found that our little fighter’s tiny body had finally given up – he had gained his wings.

I was induced that afternoon and delivered my precious Jonah Asher Skow the next day, January 22, 2017.

Follow my story on my blog, Letters to Jonah.